Soloists of great talent, Sara Chenal (violin) et Antoine Morinière (guitar) will present to us a surprising sound universe through four contemporary pieces. The program explores the dialogue between acoustic instruments and electronic sounds thanks to the Sampo, an innovative instrument that expands the possibilities of classical instruments.

This concert will also be the culmination of the work of the winner composers of the 2020 Sampo Composition Contest, Umut Eldem (Turkey / Belgium) and Philippe Hattat (France). 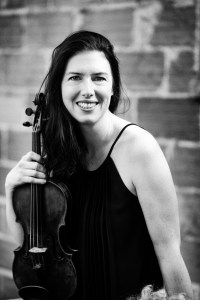 Sara Chenal’s performances take place in France and abroad. Several pieces have been dedicated to her ( J.Y.Bosseur, J-L Narvaez, F.Rossé) and she has often been asked to take part in broadcasts, in particular the well-known France-Musique programmes “Dans la Cour des Grands” or “Alla Breve”. She has recorded three CDs for Scarbo with the guitar-player Olivier Pelmoine and appears in miscellaneous recordings with Marc Perrone, Jacques Lenot, Philippe Leloup, Albert Hamman, Emilie Simon, Jean-Pierre Ferey and the quatuor Sine Qua Non.

Interested in contemporary music, he collaborates with the Japanese composer Rikako Watanabe for the piece “Suite pour guitare” which is also dedicated to him. He also premiered Obscurs for guitar and clarinet by Raphaël Sévère, and a work by Jean Frédéric Neuburger for two guitars (with Thibault Garcia) and clarinet (R.Sévère).

Born in Algeria from a Polish father and a French mother, Pascale Jakubowski follows her musical studies in France. Pursuing a double degree - piano then clarinet - to which she soon adds singing, she has been writing works that she frequently performs herself for several years already when she decides, in 1986, to take lessons in harmony, electroacoustic composition and musical analysis at the National Conservatory of the Bordeaux region.

Since the beginning, Pascale Jakubowski is inspired by the dual practice of compopsition and interdisciplinary experimentation, which leads her to work closely with artists and scientists (Trans-figurations and Télé-plastique, 1989-1992; Le destin de petits riens, in a plastic environment by Francis Proudhom, 2005). The reason for this is her sensitivity to other forms of artistic expression, which is furthermore reflected in her atonal writing style - free from strict system analysis, where the exploration of micro-intervals and the profusion of game modes with the instrument also prosper.

Artist-in-residency at Ille-et-Vilaine (1999-2000), Pascale Jakubowski elaborates an ambitious project including some of the constitutive elements of her compositional approach, such as litterature and world music, which have always deeply nurtured her reflection. Awarded by the Sacem (Society for authors and composers) in 2005 with the Pierre et Germaine Labole Prize for Hautes Terres; 2004), the composer successively holds different positions in the educational field. Since 2007 she is professor of analysis and composition at the conservatory of Saint-Etienne.

He directed the National School of Music in Montreuil.