An eclectic musician born in Albertville (Savoy), he founded the following ensembles : XASAX, the Thuillier-Bertocchi (tuba-saxophones) duo, the Trio Lézards Dégénérés (guitar, tubax, drums), the Baritone Trio (F. Corneloup, D. Lazro), The “40 after JC” quartet, the Amiens Sax Project saxophone ensemble, Ars Gallica quartet ; he plays with Yochk'O Seffer, Art Zoyd, Musiques Nouvelles Mons, the Radio-France Philharmonic Orchestra; he played under Myung Wung Chung, Armin Jordan, Peter Eötvös, Arie van Beek, Sylvain Cambreling, Pascal Rophé, Luca Francesconi ... Soloist, chamber musician or improviser, he also plays and records solo, with tape or computer : in Europe, Northern América, Middle East and Asia. Serge Bertocchi is a laureate of the Paris Conservatory (1st prize with unanimity in saxophone and chamber music), along with 6 International competitions.
He is recognised as a specialist of the baritone saxophone since the foundation of the Ars Gallica quartet in 1985, and of XASAX in 1991. More recently, he adopted (and plays regularly) extreme, rare or forgotten instruments of the saxophone familly : Tubax, soprillo, C-melody tenor, c-soprano and even the F Mezzo-soprano. He premiered around 200 new pieces by composers of all kinds, and recorded 38 CDs to this day. 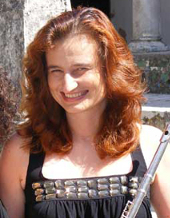 Monika Streitová, The flutist, researcher of INET- MD and Assistant Professor of the University of Évora. She graduated from the Music and Performing Arts Academy of the Bratislava University, Slovakia, where she also completed her PhD at Contemporary Music Performance in 2005. (Thesis about the Sublimation in Music "Ad Libidum".) Her current research interests are concentrated in search and application of contemporary flute techniques that may contribute to the creative development of sonority. In 2006 her CD "Luminiscence" obtained the highest award from musical critic from Czech Radio.
In 2007 she received a scholarship from FCT (Foundation for Science and Technology Lisbon) to realize her postdoctoral project at the Aveiro University, Portugal. During her research she has been cooperating with contemporary composers, namely R. Berger, J. Y. Bosseur, D. MacMouline, B. Schaffer, J. Guillou e J. P. Oliveira, and has premiered several of their works in most prestigious international contemporary music festivals.

With her flutes (modern and baroque), through performance, creation and improvisation, Claire Marchalexplores music and life. She seeks her personal voice/way that allows her to touch her audience, in a dynamic and sentitive vision of music. in the Melle GLC instrumental ensemble (ancient instruments and contemporary music), she plays baroque flutes and moves historical, aesthetic and aural boundaries of the instrument. In the same vein, the "typophonie" project that she shares with graphic artist Céline Boinnard, makes one both see the aural energy and hear the movement drawn by a line in the same time.

In the emerging "Hiatus" project, the improvised exchange that she conducts alone frm her flute to a virginal (a clavecin) equipped with motion sensors, seems to recall the paradox inside every human being.
These are a few examples of Claire's ways of expression that describe her musical universe with constantly moving borders.